Trees are of exceptionally high ecological, socioeconomic and cultural importance. As the principal biomass component of forest ecosystems, they provide habitat for at least half of Earth’s terrestrial biodiversity (Millennium Ecosystem Assessment, 2005), supporting 80% of amphibian, 75% of bird and 68% of mammal species (Vié et al., 2009). Forest ecosystems play a major role in the Earth’s biogeochemical processes, and contain about 50% of the world’s terrestrial carbon stocks (FAO, 2010; Millennium Ecosystem Assessment, 2005), highlighting their importance for moderating human induced climate change. Trees and forest ecosystems provide a wide range of benefits to people including production of timber, fuelwood and fibre, and ecosystem services such as clean water, flood protection and prevention of soil erosion from watersheds, as well as being of high cultural and spiritual value (Millennium Ecosystem Assessment, 2005; UNEP, 2009). The total value of such services has been estimated at US$4.7 trillion per year (Costanza et al., 1997). Some 1.6 billion people depend directly on trees for their livelihoods (World Bank, 2004), and forest industries contribute around $468 billion annually to the global economy (FAO, 2011). Recent research has confirmed that high plant diversity is needed to maintain provision of many ecosystem services (Isbell et al., 2011).

It is generally recognized that the most effective way to ensure the long-term survival and evolution of tree species, and the ecological communities of which they are a part, is to maintain viable populations in their native environment (Kramer et al., 2011). This is referred to as in situ conservation. Typically this is achieved through the designation and management of some form of protected area, such as national parks, wilderness areas and nature reserves (Newton, 2007). The extent of the global network of protected areas continues to increase, with nearly 133,000 areas now designated, representing 12% of the Earth’s terrestrial surface (Butchart et al., 2010). Parties to the CBD recently committed themselves to raise this figure to 17% by 2020. Despite the substantial efforts being made to support the development and management of protected areas, many are currently under threat from human activities such as urban encroachment, infrastructural development, habitat conversion, illegal harvesting and fire (Chape et al., 2005). Additional problems include policy-related issues such as weak government institutions, conflicting policies and resource tenure (Brandon et al., 1998). Because of such problems, and the fact the coverage of protected area networks is not complete, additional conservation approaches are also required.

The widespread environmental degradation that has occurred as a result of human activities has led to a growing interest in ecological restoration. This may be defined as the process of assisting the recovery of an ecosystem that has been degraded, damaged or destroyed (Bullock et al., 2011). Ecological restoration has grown rapidly over the past few decades, both in terms of a scientific discipline and in terms of environmental management practice (Nellemann and Corcoran, 2010). Billions of dollars are now being invested in restoration actions throughout the world (Goldstein et al., 2008), supported by international policy commitments such as the CBD. Many environmental organisations and community groups are actively engaged in ecological restoration projects, but increasingly restoration actions are also being undertaken by other organisations, including governments and large companies.

A number of related terms are widely used. Rehabilitation emphasizes ecosystem recovery, without including the re-establishment of some pre-existing state as a management goal. Reclamation generally refers to the environmental improvement of mined lands, and may incorporate soil stabilization and aesthetic improvement (Newton, 2007). In this case there may be less emphasis on restoring the original biodiversity present at a degraded site, and greater emphasis on restoring productivity. Afforestation and reforestation refer to the establishment of trees on a site, in the former case where no trees existed before, and in the latter case following deforestation (Mansourian, 2005).

It is also helpful to differentiate approaches involving the restoration of entire ecosystems or ecological communities, from those that focus on individual species. For example, conservation actions might focus on restoring populations of an individual tree species that had been depleted by timber harvesting. This could be achieved by artificial establishment of individuals of the tree species concerned, for example by enrichment planting, using planting stock derived from an ex situ population. If a species has been extirpated from its original habitat, it may be a candidate for reintroduction, which aims to re-establish new, self-sustaining populations of a species in the locations where it occurred previously. In recent years, reintroduction has increasingly been used as a plant conservation tool (Falk et al., 1996). For example, one-fourth of the plant species listed by the U.S. Endangered Species Act include reintroduction as a component of their recovery plan (Kramer et al., 2011). To be successful, reintroductions are dependent on the availability of appropriate material either from other nearby adapted populations or from suitable ex situ populations. Integrated conservation approaches will therefore generally involve an element of reintroduction of an individual species, as described in this manual. However, such reintroduction might form part of a broader effort to restore an entire ecosystem, as also explored further below.

Ex situ conservation can be defined as the conservation and maintenance of samples of living organisms outside their natural habitat, in the form of whole plants, seed, pollen, vegetative propagules, tissue or cell cultures. As many plant species are declining in abundance as a result of human activities, and increasing numbers are becoming threatened with extinction, there is an increasing need for ex situ conservation approaches. Botanic gardens play a major role in the ex situ conservation of plants, but a number of other organisations also maintain ex situ plant collections including academic institutions, non-profit organizations, forest services and other government agencies. Such collections can have value for research, horticulture and education, but here the focus is on their potential value for conservation.

1) The type of plant material collected (including seeds, explants, and living plants), which varies according to each species’ reproductive biology, seed characteristics, and/or adaptability to ex situ conditions. For species with orthodox seeds (i.e. able to be dried and stored at low temperatures for many years and still remain viable), ex situ collections maintained as seed banks provide the greatest direct conservation value at the lowest cost. For species with recalcitrant seeds (i.e. not able to be dried and stored), tissue culture or cryopreservation collections can also provide high direct conservation value but at a higher cost. Living plant collections can also be of conservation value, depending on how they are collected and maintained.

2) The protocols used for collecting; in general, welldocumented, wild-collected ex situ collections that capture as much genetic variation of the species as possible will have the greatest conservation value. Botanic gardens often maintain collections of living plants represented by one or more specimens per species, and from sources that are of wild or non-wild (cultivated or unknown) origin. As only genetically diverse and representative collections are appropriate to directly support in situ conservation (e.g. through reintroduction), living collections represented by only a few individuals will often be of limited value. However they can nevertheless be of indirect conservation value, for example through research, horticulture and education. It is also important to note that ex situ collection efforts must be conducted carefully to ensure wild populations are not placed at additional risk.

3) The subsequent maintenance of viable germplasm, which plays a critical role in determining the ultimate conservation value of an ex situ collection. Without proper curatorial management, the conservation value of a collection, or the collection itself, can be entirely lost. Collections with the most direct conservation application are genetically diverse and representative of the species, and must be managed to ensure the material is genetically sound and available for conservation activities over the long-term. Many living collections today do not meet these standards owing primarily to genetic issues such as having too little genetic diversity, being of unknown provenance, or losing genetic diversity via drift or adaptation to cultivation and hybridization. Management of ex situ collections should also minimize the risk of loss due to random events or natural disasters (such as staff changeover, theft, fire, disease, or other catastrophic loss) by ensuring that collections are maintained at more than one site. Additionally, curatorial oversight of living collections through time is crucial to maintaining associations between collection data (e.g. provenance) and specimens.

In recent years, increasing emphasis has been placed on integrated conservation approaches, in which in- and ex situ approaches are combined, often together with reintroduction and ecological restoration. The traditional idea that the role of botanic gardens was to hold cultivated stocks of threatened species during a period of habitat degradation, in what has been described as the “ark paradigm,” is no longer believed to be sufficient (Havens et al., 2006). Rather, for botanic gardens to be effective with respect to conservation, the species banking approach must be integrated with other conservation approaches focusing on habitats and ecosystems (Havens et al., 2006).

(i) determination of the biological entity of concern, including definition of the target level of biological organization (such as species, sub-species, variety or race);

(ii) identification of the threats to this entity; and

(iii) consideration of the full range of conservation resources that may be brought to bear on the problem.

Integrated conservation approaches deliberately seek a broad base of information about a conservation problem and employ a wide range of complementary tools to accomplish a given objective (Falk, 1987). Such approaches are typically highly site-specific and based strongly on local context, in contrast to traditional approaches that are more general in scope. Individual approaches can be of value at different scales; for example, seed banks are well suited to conserve genetic diversity within a population, but are incapable of conserving communities or ecosystems. However, they may play a role as part of an overall integrated strategy to address diversity at multiple levels of organization. Rather than being viewed as separate and distinct, in and ex situ conservation approaches can therefore be viewed as part of a spectrum of compatible, mutually reinforcing methods (Falk, 1987). For example, Falk (1987) provides the example of the successional management of a fire-adapted ecosystem, such as a prairie or savanna, which may involve fencing, site preparation, controlled burns, and reseeding with native species. Such a management regime may differ from a reintroduction program only in terms of the number of years during which a particular species is absent from the site, or from ecological restoration only in terms of the number of species that are the focus of conservation efforts.

Integrated conservation of tree species therefore includes both in situ and ex situ action, linked by restoration, reintroduction and collection, to support species survival. This process can be supported by research, horticulture and education that can ultimately increase the success of conservation efforts (Figure 1). Botanic gardens and related organizations can play a major role in integrated plant conservation throughout the world, and are uniquely positioned to be able to support such efforts (Havens et al., 2006). 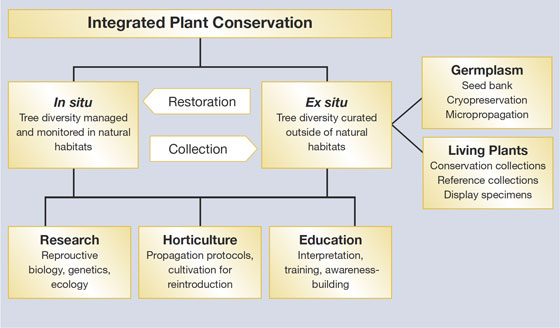 Chape S., Harrison, J., Spalding, M. and Lysenko, I. (2005). Measuring the extent and effectiveness of protected areas as an indicator for meeting global biodiversity targets. Philosophical Transactions of the Royal Society B, 360, 443–455.

This article was excerpted from the original with the kind permission of the publisher and authors from:

BGCI is an international organisation that exists to ensure the world-wide conservation of threatened plants, the continued existence of which are intrinsically linked to global issues including poverty, human well-being and climate change. BGCI represents over 700 members - mostly botanic gardens - in 118 countries. We aim to support and empower our members and the wider conservation community so that their knowledge and expertise can be applied to reversing the threat of extinction crisis facing one third of all plants.

Related Editions of The Overstory

Cool Books for YOU...